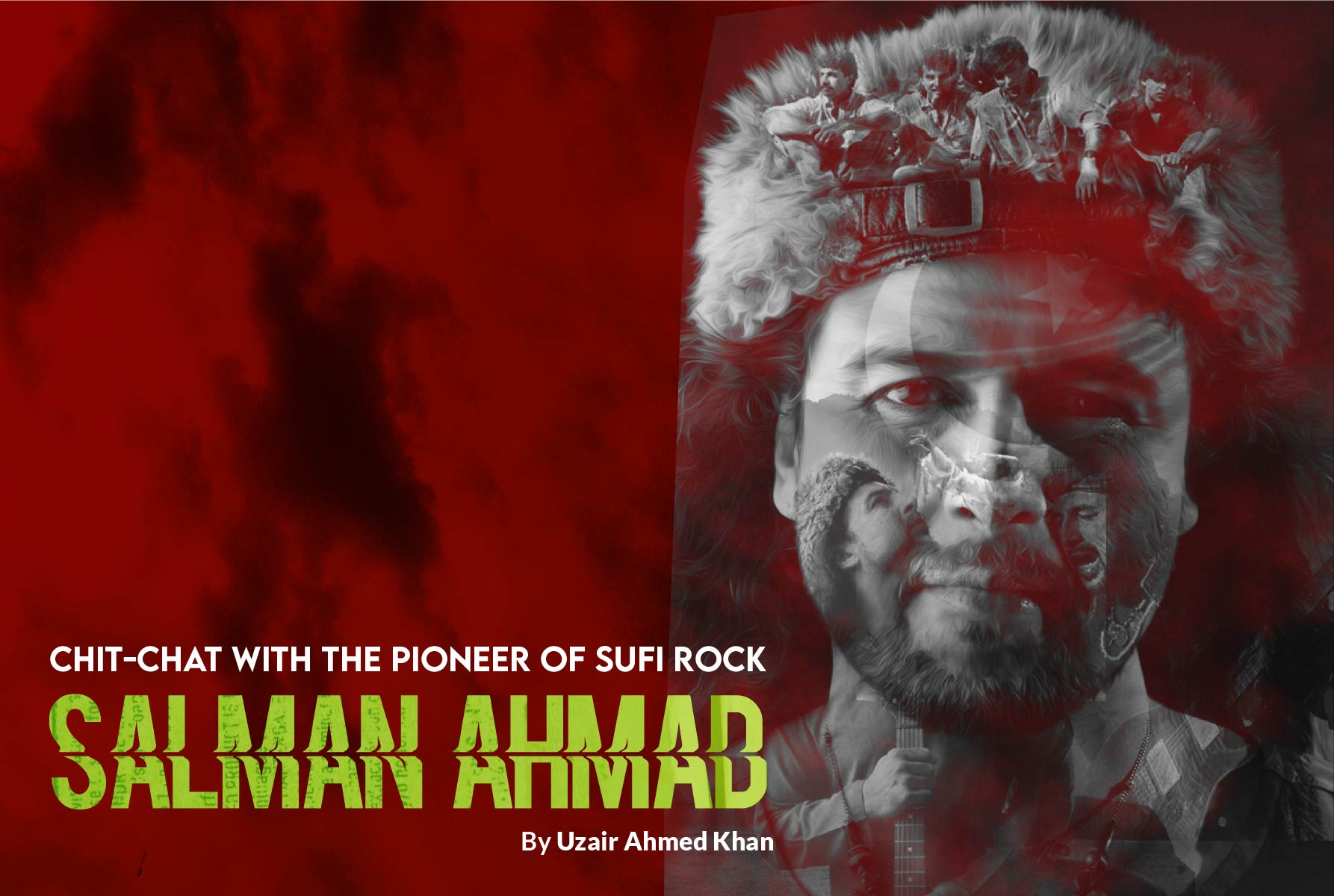 There have only been two bands in the history of South Asia rock music whose infatuation among the public has remained uncanny. Junoon and Vital Signs were two bands that defied stereotypes and made significant contributions to Middle Eastern /South Asian  /Pakistani music. Here we’re speaking with a notable figure who has served as an influence to a number of well-known vocalists. People have been motivated to dream because of him, and his name will go on forever to be remembered in the annals of Pakistani music Mr. Salman Ahmed!

You founded two of Pakistan’s most popular bands, vital sign, and Junoon! Which one of them is your personal Favorite, and why?

I’m deeply honored to be part of two iconic Pakistani bands whose music has been influential in shaping the modern cultural history of Pakistan. I joined Vital Signs because of my friend Junaid Jamshed’s insistence. The word “ Junoon” came to me in a dream & so I followed my heart with Junoon as an alternative rock band as a contrast to the soft pop music of Vital Signs.

Dil Dil Pakistan is a song that still causes goosebumps! How did the idea of it come into existence?

Allama Iqbal said “ that whisper in your heart has strength, it may not have wings but it has the power to fly “, Dil Dil Pakistan came from the heart of Vital Signs & it has become timeless & ageless.

The concept of bands in Pakistan is practically on a dead end. What do you think is that? Why aren’t there any more bands or bands like Vital Signs and Junoon?

Young people should express their thoughts, emotions & energy through music. A band is an excellent vehicle to touch people’s hearts & effect a positive mindset in the society. Take risks & don’t be afraid of failure.

Back in the 1990s, Vital Signs was at the top of the Pakistani music scene. You only made one album and then vanished. This is still a closely guarded secret, and fans still wonder as to why did you leave Vital Signs?

The music I heard in my head & heart was very different from what Vital Signs wanted to play, so I left to experiment with Junoon.

The current era’s musical themes have shifted. Rather of conveying a positive message, the songs focus on love and breakups. What do you believe has caused this shift?

Today’s issues are complex & complicating: the extreme behavioral change caused by the pandemic, the resultant shift in moods & outlooks need to be addressed through poetry, music & film. That’s why I worked on Spiritual Democracy for most of this pandemic reboot.

Junaid Jamshed and you had a special bond. Would you like to share one of Junaid Jamshed’s qualities that many of his followers are still unaware of?

JJ was one of the most generous & kind-hearted people I have ever met. He was a Yaron Ka Yaar.

In your generation’s music videos, the themes were focused on Pakistan’s historical and cultural values, however, today’s themes are based on materialistic items. What are your thoughts on this?

Power, wealth & fame are dark energies that can cause addiction & disease of the heart. One has to be careful otherwise you can drown in them & lose yourself.

Both Failure & success are two teaching tools if you can learn from them objectively. The greatest sin is to not try at all because of the fear of failure.

Our melodies and tunes have been plagiarised by Bollywood on several occasions. What changes would you make in terms of copyright if you were granted authority?

Pakistan should be a part of global performing rights societies like ASCAP & BMI. Copyrights need to be protected nationally & internationally. I have registered all of my creative intellectual property & I urge Pakistani artists to do the same.

Since the rise of EDM and pop music, the music game has changed dramatically. What do you believe is causing rock music to enter a gloomy period?

As long as you are passionate about recording music, there will be an audience who will listen to it & recommend it. With social media, YouTube & FaceBook the distribution channels are at your fingertips. All you need to do is to create exciting new content.

With so much change in our music industry, where do you think it will be in ten years?

This generation of artists needs to be bold, creative & hardworking. The sky is the limit.

What memories do you have of that early ’90s period in the band’s history-making records like Sayonee and Jazba Junoon?

When Junoon toured the world in 2018,2019 & early 2020 we saw that our songs were being sung by teenagers who had memorized our songs through their elder relatives’ interest in Junoon. It’s a huge honour to be playing for multiple generations across the world.

Is there anything you are working on currently? Your fans are excited to know about your upcoming project.

What is one message you would give to your fans?

Never be afraid of failure, never take action out of fear.