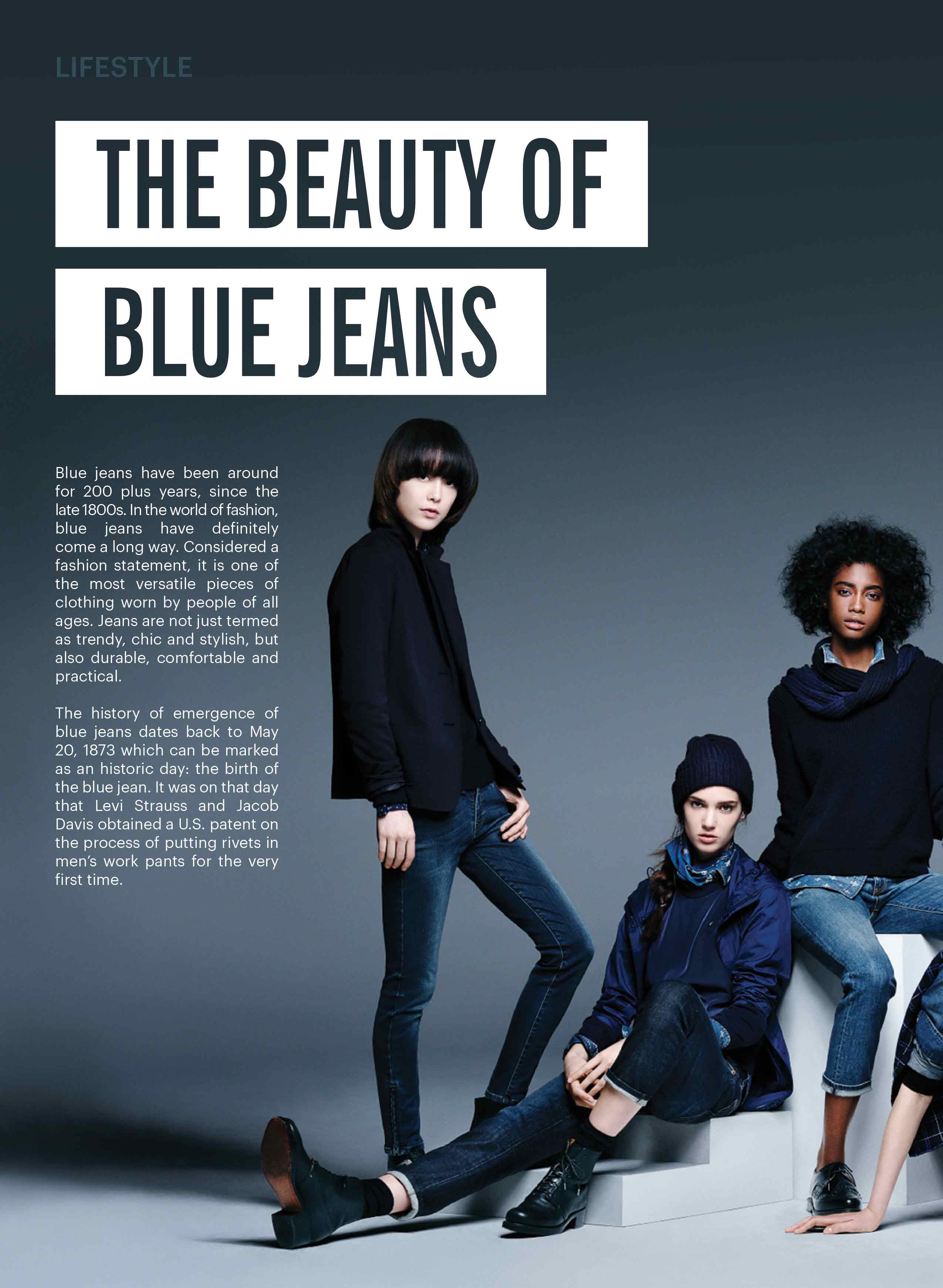 The beauty of blue jeans

Blue jeans have been around for 200 plus years, since the late 1800s. In the world of fashion, blue jeans have definitely come a long way. Considered a fashion statement, it is one of the most versatile pieces of clothing worn by people of all ages. Jeans are not just termed as trendy, chic and stylish, but also durable, comfortable and practical.

The history of emergence of blue jeans dates back to May 20, 1873 which can be marked as an historic day: the birth of the blue jean. It was on that day that Levi Strauss and Jacob Davis obtained a U.S. patent on the process of putting rivets in men’s work pants for the very first time.

Who was Levi Strauss?

He was a Bavarian-born dry goods merchant who came to San Francisco in 1853 at the age of 24 to open a West Coast branch of his brothers’ New York wholesale dry goods business. Over the next 20 years, he built his business into a very successful operation, making a name for himself not only as a well-respected businessman, but also as a local philanthropist.

The story of Blue Jeans

One of Levi’s customers was a tailor named Jacob Davis. One day the wife of a local laborer asked Jacob to make a pair of pants for her husband that wouldn’t fall apart. Jacob tried to think of a way to strengthen his trousers and came up with the idea to put metal rivets at points of strain, like pocket corners and the base of the button fly. These riveted pants were an instant hit

Soon, the first riveted clothing was made and sold and became popular as work wear garment. Within a very short time, the jean was a bona fide success.

Indigo is the first dye that was used for coloring jeans, and the first blue denim was made from interweaving blue and white threads. The first blue jeans that were designed for workers and miners were called “bull denim”. To sew the Levi Strauss blue jeans, orange thread was used to match the copper rivets and improve durability. Later, synthetic colors were used for coloring the jeans.

From Work-Wear to Fashion

Initially, denim was worn by mechanics and miners. Nonetheless, in the 1950s, the influence of the music industry and film started the trend of using jeans as a fashion statement. Marlon Brando and James Dean were two of the famous actors who popularized denim. At that time, denim was a symbol of youth and rebellion. In the 1970s, the use of stone washing technique revolutionized the manufacturing of denim, and people of all ages and walks of life started wearing denim.

In the 21 st century, denim comes in many different styles, including carpenters, sportswear, khakis, chinos, and combat. It is also available in a wide variety of colors, ranging from white and blue to brown and black. It is worn by fashion models, movie stars, and ordinary people. Today denim is the favorite choice of clothing for millions of people from around the world.

James Dean popularized blue jeans in the movie Rebel Without a Cause in 1955. He wore a T-shirt, a leather jacket, and jeans, a uniform men began copying immediately. Since people didn’t have access to the internet or even television in many cases, movies and the actors in them held sway over the public imagination even more than they do now. While it was originally supposed to be a black and white picture, the studio decided to make the film in color; Dean’s Lee 101 Riders were dip-dyed to make the blue especially eye-catching. It’s not surprising that a whole class of young men immediately began replicating the look.

What Not To Wear This Winter