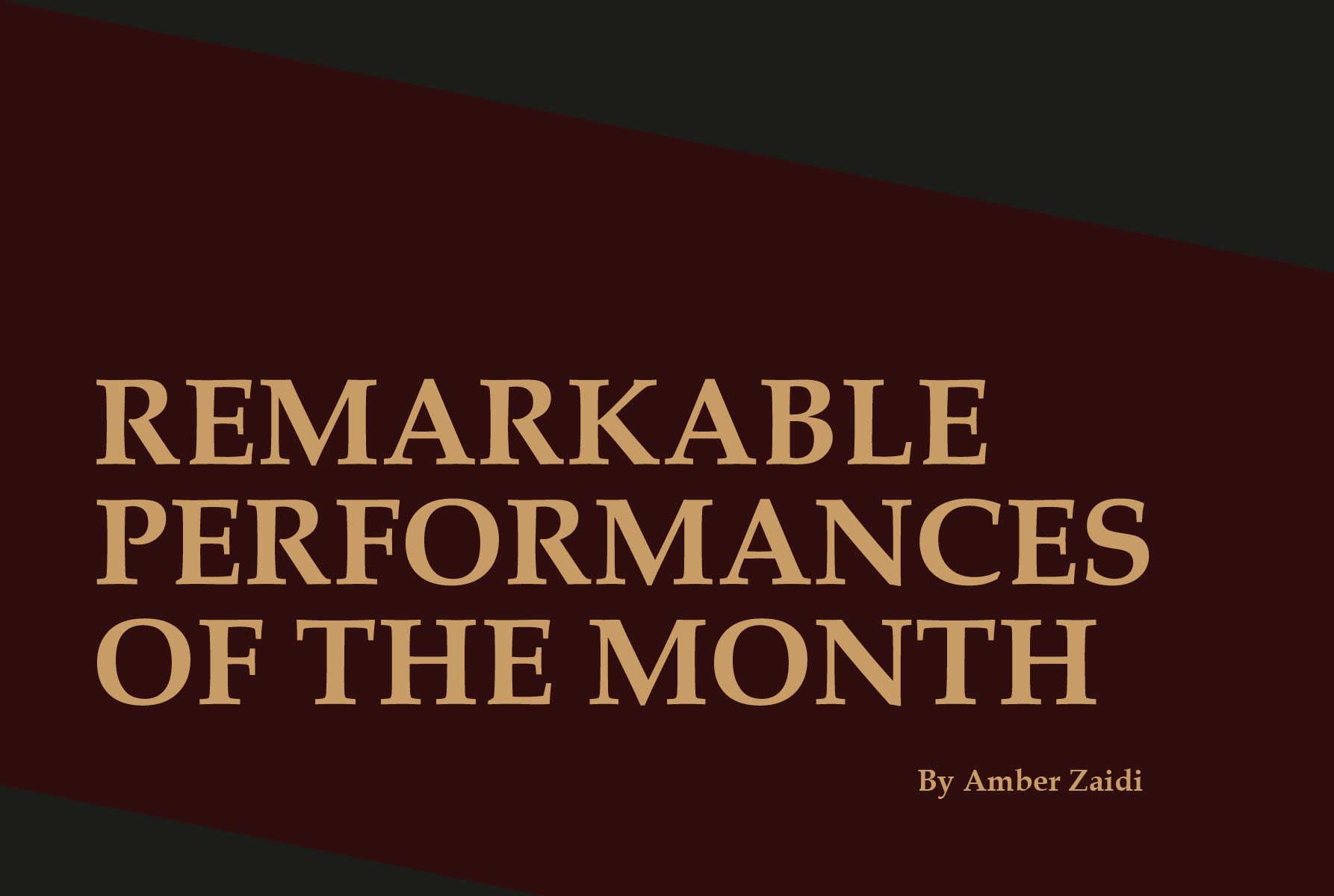 2021 has proved to be a perfect year for the entertainment industry of Pakistan. Newly released dramas have impressed the audience with their plot, storytelling, and stellar acting from some of our artists. No doubt, our industry is filled with proficient actors and actresses, however here we have five performers who deserve a round of applause for their outstanding work.

Kaif Ghaznavi, a multidimensional personality of the Pakistan media industry who has proven herself on various levels whether it belongs to acting, singing, dancing, or direction with her incredible skills. Titles like Lamhay, Sangay Mar Mar, Yeh Shaadi Nahin Hosakti, and Khatoon Manzil are drama serials that catapulted Ghaznavi to new heights. Recently, she has won best actor- Femaleaward for a short film Andha (Blind)in which she portrayed a character of a woman, married a man who has been sexually assaulted her in childhood. The feature film got huge appreciation worldwide and received the “Best story award of the year” at the Mumbai International Film Award earlier in 2021.

Sangay Mar Mar actress has become successful again in gaining the attention of the audience with her noticeable performance by playing a role of a maid in star-studded drama serial “Hum Kahan Kay Sachay Thay”.42 years old Shabbo recently appeared in an interview where she talked about the challenges she faced and mentioned that“There were scenes in which I had to just run up and down the stairs again and again”. She further added, “It was very challenging for me, and the weather was too harsh when we were shooting the drama”. Meanwhile, Kaif Ghaznavi also indicates, in drama, it seems like Shabbo’s character has a short place, but she will play an important role in the upcoming episodes.

With clever and tricky tactics, expressive dialogue delivery, and witty responses Kaif Ghaznavi aka Shabbo has won million hearts, viewers are amazed by the way she acted. The actress has proved that no role is big or small, lead and supporting characters doesn’t matter if it has well scripted and directed.

Ushna Shah is one of the finest actors who inspires the audience with her phenomenal performances. She started her career in 2013 with drama Mere Khuwabon Ka Diyafrom which she received positive feedback but initially, what gives a boost to shah’s career was her thriller serial “Bashar Momin”.

Alif Allah Aur Insaan actress is known for her bold, unapologetic, and unfiltered opinions, any issue whether it belongs to industry, social or mental health. she never keeps herself away from it and addresses it confidently on social media platforms that’s why she often remains in the news for her statements.

Currently, Cheekh famed actress playing a strong and protective character in project Aakhir Kab Tak. Being a female actor, she got a new dynamic to prove her skills, in the dramaNoor’s character holds an important message for society, no matter what your gender is, being a human being if you know about something which is inappropriate and unjustified you must take a stand there. Sometimes silence is the ultimate solution to issues, but every time staying in a silent mode can destroy yourself and around you too. This is what Ushna Shah wants to deliver through her role.

During the promotions talking about Noor’scharacter in an interview, she said, “It is one of my favorite characters that I have ever played. She is very relatable for me”.

HUMAYUN ASHRAF BEING AN EVIL MAN

Humayoun Ashraf, who started his career in the showbiz industry at the age of 12 from commercial modeling. Later, with the hard work, he made his own place through outstanding performances in daily soaps. Hasil, Ishq Hamari Galiyon Main, Mere Khuda, Kala Jadu, Mere Meharbaan, Ab Dekh Khuda Kiya Karta Hai and Rangmahal are the serials that can be considered landmarks in Ashraf’s career. In 2013 Ashraf has also been awarded ‘Best Actor.

Recent top-rated soap named Rang Mahal has been the talk of the town. Humayoun Ashraf’s negative role of Sohail making waves, Sohail, a person who is very straightforward, arrogant, and vocal can go to any extreme to have what he wants. He knows how to turn the table. Sohail’s portrayal is not fiction based however it also cannot be generalized but such kind of people lives around us who can go to any level for the sake of their satisfaction.

In the love and revenge war, Humayoun Ashraf aka Sohail once again grabbed the public attention with powerful acting.

BASIT, NOT A CHARACTER, A REALITY THAT EXISTS IN OUR SOCIETY

Fahad Sheikh, an excellent addition to the Pakistan media industry. Through fine work, the uber-talented actor becomes successful to bound the viewers towards himself. In a short span of time Sheikhmade his own way and showcased his talent in hit dramas likeBandish, Khudparast, Ghamand, Mubarak Ho Beti Hui Hai, and Badbakht.In an interview, while talking about their career journey he shared that what renowned actor and host Fahad Mustafa said to him, “you are not an actor, The day you started good work people will definitely watch you.” and eventually, Fahad’s acting skills hooked up the audience to watch his work. The drama that proved to be a game-changer for him was Jalan, a play from which he gained popularity.

In a recent serial of ARY DIGITAL “Azmaish” Sheikh played a character of a person who belongs to a middle-class family, a dedicated employee, decent and kindhearted man but as the situation doesn’t always remain the same, the story got a new turn where Fahad Sheikh aka Basit (who liked another girl) had to get married to his executive’s stubborn, rude, and selfish daughter. Despite knowing about her nature, evil activities, and disrespectful behavior he tried his best to save the relationship. Basit didn’t want to leave her, he wants to live a prosperous life with his partner but unfortunately, she compelled him to quit it.

In Pakistan, such kind of men really exists who acts wisely and handle matters patiently. Being the head of the house there is a percentage of men who wonderfully manage domestic affairs and make efforts to resolve internal problems. In most of our dramas, female characters are painted as innocent, quiet, and shy contrary to that, males are portrayed as spoiled, abusive, and having irresponsible behaviors that promote male chauvinistic society is completely unfair.

New emerging talent is ruling the hearts of the public. Hiba Bukhari swiftly becomes one of the leading actresses of the industry. She made her acting debut with a supporting role in a Rom-Com TV serial Teri Meri Jodi and soon started appearing on the lead. Bukhari gave blockbuster dramas like Thori Si Wafa, Bholi Bano, Haara Dil, Silsilay, Ramz e Ishqand Deewangi. Geo TV’s recent dramaFitoor added another feather in her cap, Hiba Bukhari aka Dil Nasheen received appreciation from the audience for her power-packed performance. Although the plot of the drama was not different, the chemistry between Haider and Dil Nasheen is what keeps the audience engaged.

No one is perfect, everyone makes mistakes, and any decision can prove to be right or wrong. This is what Dil Nasheen’s character is all about. Judging someone because of his/her past is a ridiculous thing that mostly happens, and Bukhari’s role has addressed the severe consequences of it, in our society, people are unaware of how it really affects one’s life and future. Despite the negative and positive aspects of dramas, at least viewers should make an effort to look at what point does a writer wants to shed light on.

Healthy Eating Tips For Ramadan and Exercise During Ramadan